In general the widely used libraries are well designed and implemented, and it’s very interesting to learn from them some coding best practices.

Let’s take a look inside the hibernate core library and discover some of its design keys.

In this post Hibernate Core is analyzed by JArchitect to go deep inside its design and implementation.

Package-by-feature uses packages to reflect the feature set. It places all items related to a single feature (and only that feature) into a single directory/package. This results in packages with high cohesion and high modularity, and with minimal coupling between packages. Items that work closely together are placed next to each other.

Hibernate core contains many packages, each one is related to a specific feature hql, sql, and others. 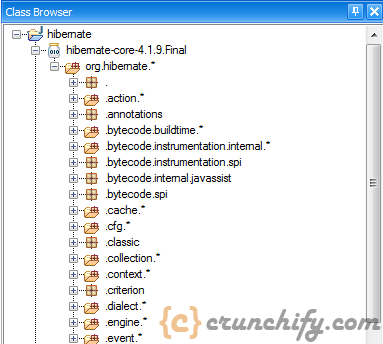 Low coupling is desirable because a change in one area of an application will require fewer changes throughout the entire application. In the long run, this could alleviate a lot of time, effort, and cost associated with modifying and adding new features to an application.

Let’s search for all interfaces defined by Hibernate Core, for that we use CQLinq to query the code base. 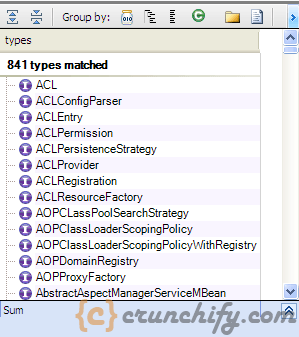 If our primary goal is to enforce low coupling, there’s a common mistake when using interfaces that could kill the utility of using them. It’s the using of the concrete classes instead of interfaces, and to explain better this problem let’s take the following example:

The class A implements the Interface IA who contains the calculate() method, the consumer class C is implemented like that

The Class C instead of referencing the interface IA, it references the class A, in this case we lose the low coupling benefit, and this implementation has two major drawbacks:

C# introduced the explicit interface implementation capability to the language to ensure that a method from the IA will be never called from a reference to concrete classes, but only from a reference to the interface. This technique is very useful to protect developers from losing the benefit of using interfaces.

With JArchitect we can check this kind of mistakes using CQLinq, the idea is to search for all methods from concrete classes used directly by other methods. 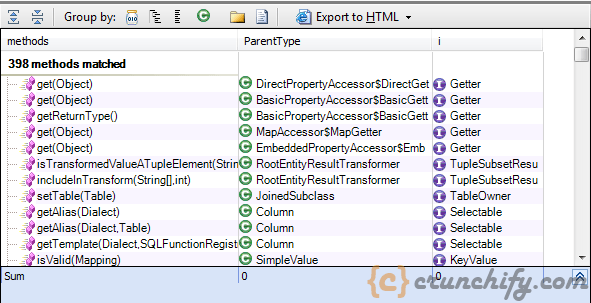 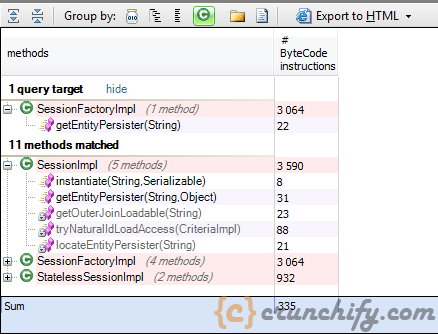 Methods like SessionImpl.instantiate invoke directly getEntityPersister, instead of passing by interface, what break the benefit of using interfaces. Fortunately hibernate core doesn’t contains many methods having this problem.

The other lib could:

Let’s take the example of antlr lib which used to parse the hql queries, and imagine that another parser more powerful than antlr was created, could we change the antlr by the new parser easily?

To answer this question let’s search which methods from hibernate use it directly: 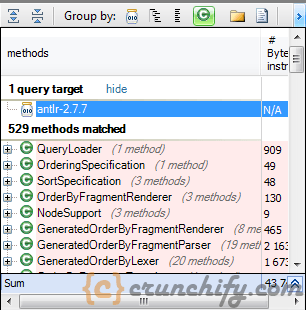 And which ones used it indirectly: 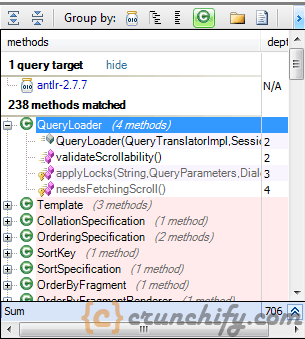 Many methods use antlr directly what makes hibernate core highly coupled with it, and changing antlr with another one is not an easy task. this fact not means that we have a problem in hibernate design, but we have to be careful when using a third party lib and well check if a third party lib must be low coupled or not with the application.

The single responsibility principle states that a class should have one, and only one, reason to change. Such a class is said to be cohesive. A high LCOM value generally pinpoints a poorly cohesive class. There are several LCOM metrics. The LCOM takes its values in the range [0-1]. The LCOMHS (HS stands for Henderson-Sellers) takes its values in the range [0-2]. Note that the LCOMHS metric is often considered as more efficient to detect non-cohesive types.

LCOMHS value higher than 1 should be considered alarming.

In general classes more concerned by the cohesion are the classes having many methods and fields.

Let’s search for types having many methods and fields. 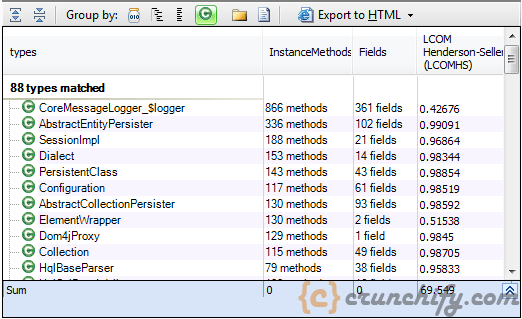 Only few types are concerned by this query, and for all them the LCOMHS is less than 1.

Annotation-based development relieves Java developers from the pain of cumbersome configuration. And give us a powerful feature to free the source code from the boilerplate code. The resulting code is also less likely to contain bugs.

Let’s search for all annotations defined by hibernate core. 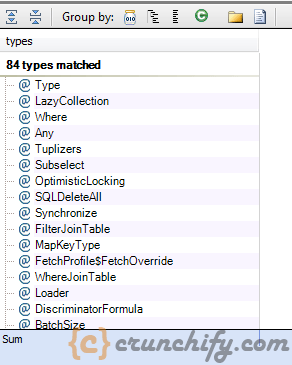 Many annotations are defined, what make hibernate easy to use by developers, and the headache of configuration files is avoided.

Hibernate Core is a good example of open source projects to learn from, don’t hesitate to take a look inside it.