We are now hosted at Kinsta web hosting, one of the best and suggested by Google, deployed on Google Cloud Containers.

So far it’s working very well for us. Take a look at below screenshot. Page loads in kind of ~34 milliseconds and that’s awesome.

Last month we moved to Bluehost’s Optimized – Managed Hosting for WordPress Plan. So far I’m very impressed and happy with the result. I was looking at the results and metrics & thought why not to share my opinion with others. I’m sure you must have read so many articles on below topics so far but one more :).

Let me share some more light on this. Why I moved to diff hosting plan and all reasons behind that? When I started Crunchify.com, I was using Hostgator’s shared hosting. Immediately after few months moved to Hostgator’s Managed VPS Hosting. I was with them for more than 2 years but some how recently started facing so many performance issue. As you can see below traffic increased significantly on Crunchify in last 4 months. Almost ~345k visits/day.

Below update and review is not biased. It’s totally my opinion. Thanks Hostgator for all your service so far :). Also, this is not a promoted post by Bluehost either. But yeah, links are affiliate links.

Let’s start with the reasons I think which made me switch hosting plan. Checkout below diagram from Google’s Webmaster tool. Total time spent downloading a page. In middle of August 2014 we started facing lots of high page load time issues.

DB server issue. Below image is from VPS panel.

My MySQL instance was getting killed every 3 days. I filed Hostgator ticket and admin helped me a lot. Find below very nice and detailed technical update from them. I really appreciate feedback.

There have been five incidents over the past two days when your VPS ran out of memory. This dispatches the kernel out-of-memory killer, whose goal is to try to bring the server back under control as quickly as possible by reaping the heaviest memory consumers. The MySQL daemon happens to use a lot of memory, so it was one of the unlucky processes to get killed.

I have enabled automatic restarts for MySQL, meaning that the next time it crashes, cPanel will “automagically” restart it without intervention.

As for the cause of the failure, it is not clear from the logs on the server right now, so I installed HostGator’s system snapshot software, which will log what goes on on the server every minute, and this will allow us to pinpoint what is causing your VPS to run out of memory.

But somehow this DB issue one of the reason I moved away from the VPS hosting. How come default setting kills MySQL daemon? Without that your WordPress blog is dead. Is that hard to believe?

Then I had 2 choices:

It was tough decision but I tried risk and moved to Bluehost.

So far I never faced any issue. Newly created this WordPress Optimized Hosting really worked for Crunchify. Brand new cPanel. 5 Managed WP Sites and more. I only thing I’m missing is free SSL with my plan. Hostgator was giving away free DOCOMO SSL certificate with almost all plan.

No need to mention but there are lots of other WordPress Optimizations I have performed to make page load very faster including moving to faster MaxCDN. Now page loads very fast. Just ~0.4 seconds to load.

Reason why I switched to another Hosting within couple of months

The only reason I’m posting below points here because I want to give correct and honest feedback to my readers. Atleast I can put all points in front of users so they can decide on their hosting need.

On December 4, 2014 – Bluehost had SAN (Storage Area Network) issue and my VPS server was one of them. Find here below all screenshots which are self-explainable.

Point 1.1 You don’t want to see this error message for your VPS server (Your Hosting Server is not active). 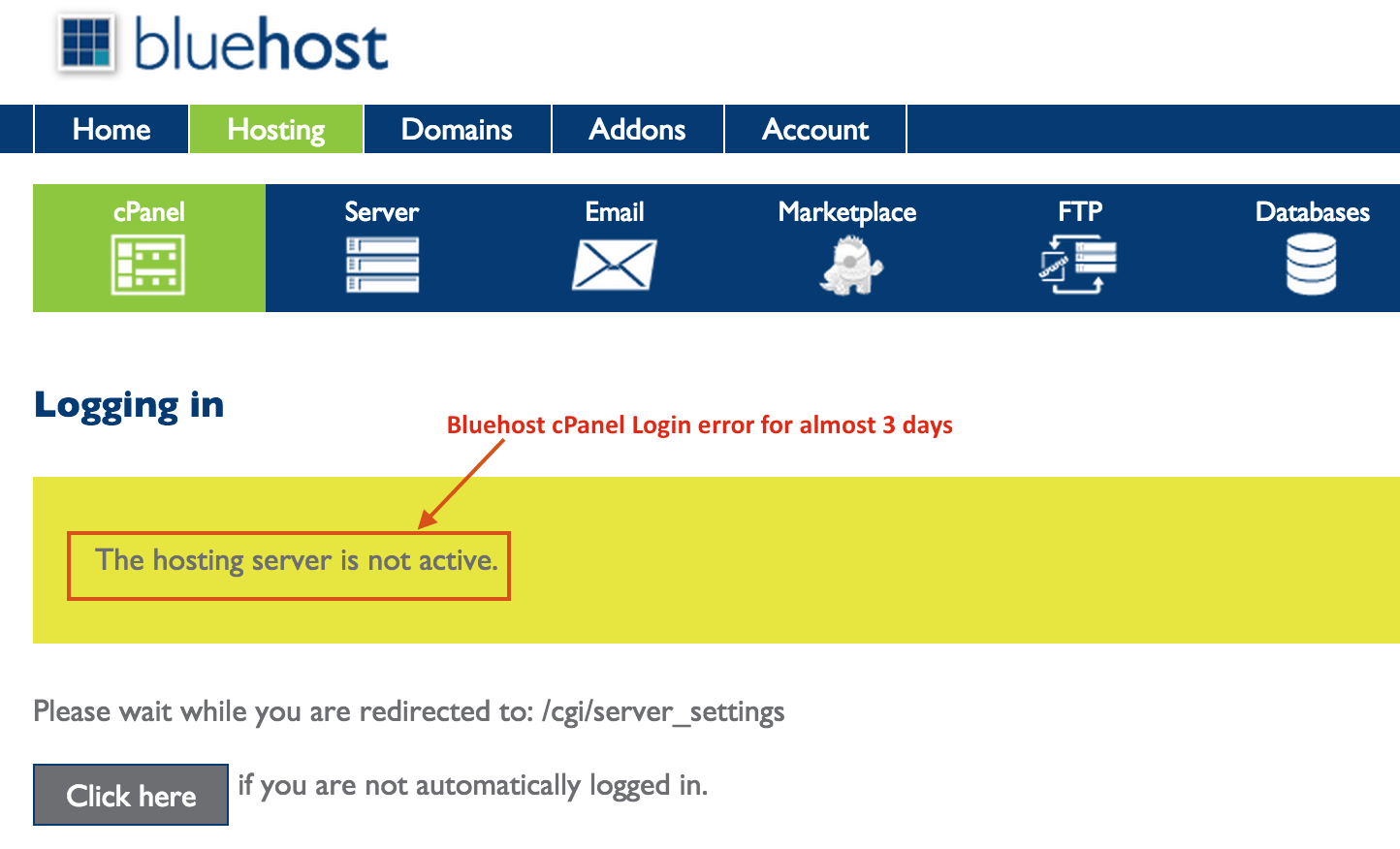 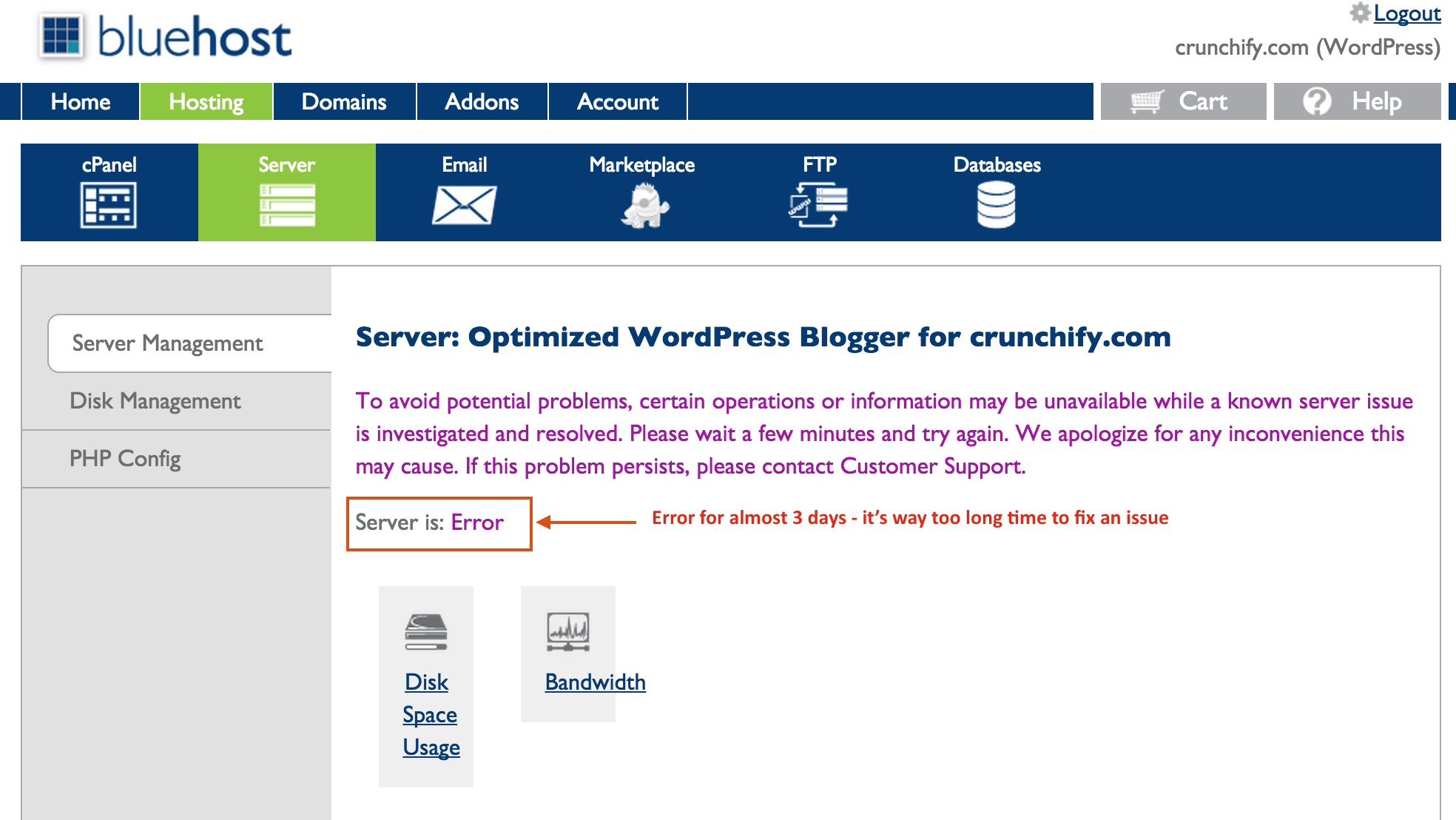 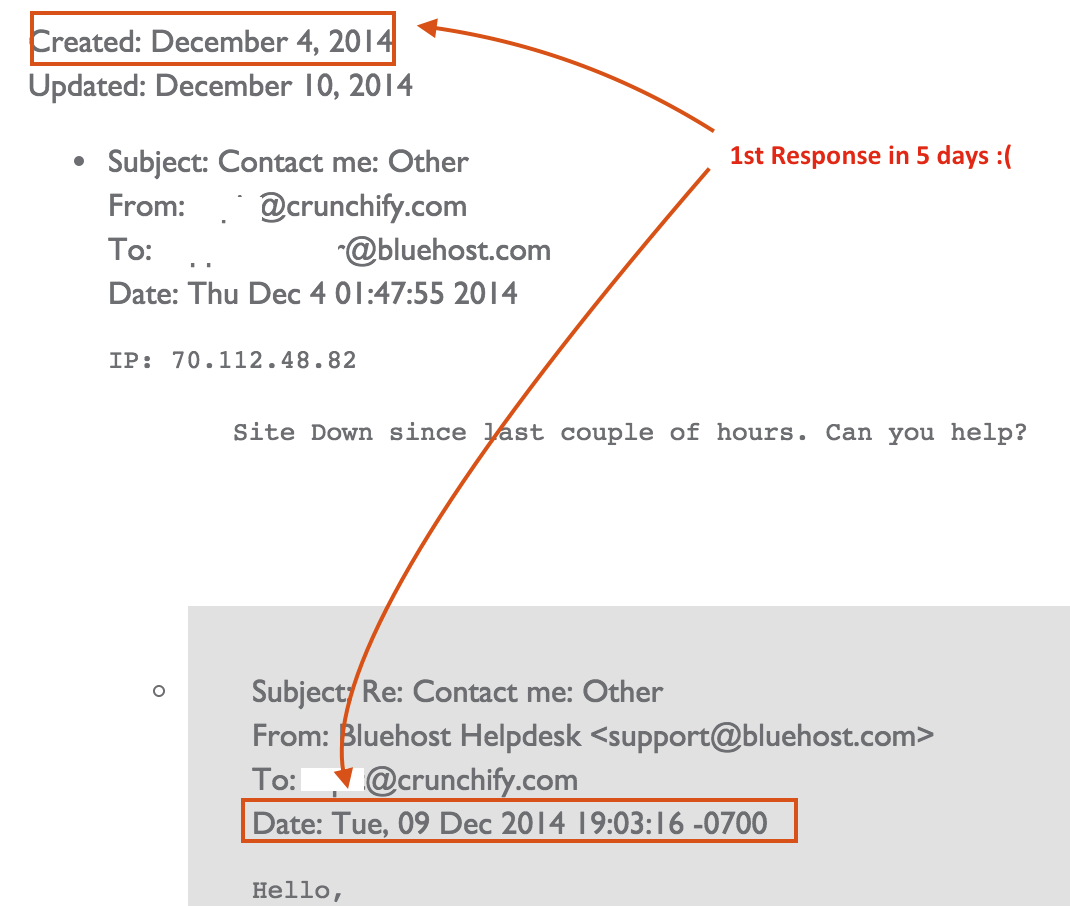 I also filed another 3 tickets and response time was between 3 to 5 days. By that time I already moved to another hosting provider. So, guys, I made this mistake before but I would suggest all of you to consider these points while selecting your Web Hosting.